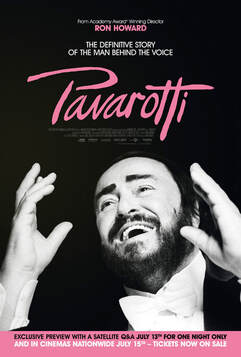 We have decided to CANCEL this screening due to the current situation with the COVID19 virus
​WEDNESDAY 25th March
'PAVAROTTI' ITALY/USA Documentary (M) SPECIAL SCREENING   Featuring never-before-seen footage, concert performances and intimate interviews, filmmaker Ron Howard examines the life and career of famed opera tenor Luciano Pavarotti. The film soft-peddles any sense of controversy but what emerges is an entertaining portrait of a generous, funny, larger-than-life figure. And the music is sublime. Tickets $15 / $12 from eventfinda.co.nz and on door (if not sold out) Text bookings to 0210 222 5558 Doors/Bar open 7pm film starts 7-30pm
Review. Born in 1935 in Modena in the worker-class family of a father baker and a mother who worked in a cigar factory, Luciano Pavarotti felt since his childhood the passion by opera due to his father, an amateur tenor. Blessed with a powerful voice and student of the most important Italy's opera teachers of those times, soon the name of Pavarotti turned in a reference of the genre, giving some of the most remembered live performances in the most important theaters across the world, meeting with politicians and world leaders as well as rock and pop singers to bring concerts for humanitarian causes, over-passing any limit when he was part of The Three Tenors with the too opera singers José Carreras and Plácido Domingo. Using archive footage, unreleased material from home videos and photos, and interviewing his closest friends and his family, legendary director Ron Howard reviews the professional carrier of the man who achieved turn opera in a mass phenomenon as never before at the same time ...
​
Wednesday 1st April Sorry this event is has been Cancelled due to INCREASED SCREENING FEE and now the Covid19 virus situation.
'A SEAT at the TABLE' (E) NZ SPECIAL SCREENING.  Savour 100 minutes of eye-popping camera work, picturesque vineyards & gratuitous grape-fondling shots in this glorious toast to the talent and the stories behind New Zealand’s world-famous wine industry. Interviewees include English wine critic Jancis Robinson and wine wholesaler Stephen Browett.  Tickets from eventfinda.co.nz and on door if not sold out $20 / $15 INCLUDES GLASS OF WINE  Text bookings to 0210 222 5558 Bar open 7pm Film starts 7-30PM